This post was sponsored by @GBChildUsa as part of an Influencer Activation for Influence Central. I received the GB Lyfe Pram Travel System to facilitate my review. #Stroller #TravelSystem #Prams

When you’re used to being on the go, introducing a baby to the mix can really put a cramp in your style – both figuratively and literally.  First of all, you start feeling like you just can’t go everywhere you used to go (chances are that routine visits to the pub, indeed are out), or that it’s much harder to keep baby calm and comfortable while you’re grabbing dinner with your spouse.  At the same time, baby gear can be cumbersome and often unattractive.  No offense, but a big purple dino slathered all over my baby equipment doesn’t exactly say “haute couture.”  Then again, I’m not exactly the most stylish person on the planet, but I do like to feel like a grown up now and again – it keeps my sense of self in line and makes me more confident.

When I can, I also like choosing baby gear that does a lot, meaning that I can use it over a few stages of my child’s infancy and have it perform multiple duties.  It’s like Alton Brown and his kitchen tools – he hates a single use item.  My very first stroller when Red was a baby was similar to the GB Lyfe Pram Travel System in that it was both a stroller seat AND a pram at the same time. I knew instantly that it was a stroller that would let me keep him happy (NAPS!) and let me continue to lunch with friends, hit the stores for work as well as enjoying family walks around the neighborhood.  What that stroller didn’t necessarily have was the sleek styling or modern colors of the GB Lyfe.

The GB Lyfe Pram Travel System is true to it’s name, consisting of a car seat (the Asana 35), a frame, and a stroller seat with a pram conversion option.  The car seat is extremely roomy and comfortable, with brushed fabrics, an infant insert, full canopy and an updated and sensible five point harness that uses a no-thread system and a tried-and-true adjustment belt.  There are no springy, self-adjusting belts to this car seat. The car seat it a little bit long, so I’m thinking that it might not fit easily into many smaller cars, but will provide an extremely safe and easy place for baby to ride. 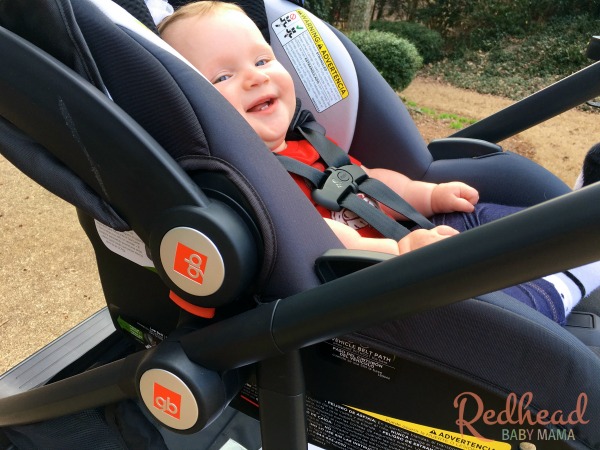 It’s extremely easy to attach this car seat to the GB Lyfe frame, too.  The seat slips on with a click, and releases the same way you would take the seat from the car; with a lift handle at the top back.  The car seat’s canopy offers sun protection and its extremely easy to wheel this stroller around; large wheels and a soft handlebar make for smooth turns. 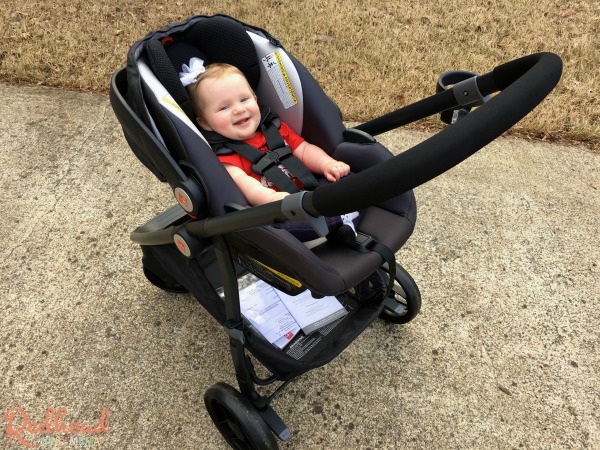 When it’s time for baby to transition to the pram or stroller, the stroller seat frame clicks onto the GB Lyfe Pram Travel System stroller easily.  In the image below, I’ve identified both the stroller seat release buttons (that slip onto the same places as the car seat) as well as the lap bar that can be removed for the pram configuration or to slip your toddler out of the stroller seat.

Since the GB Lyfe stroller frame with accept both the car seat and the toddler seat in two positions, you can have your child facing you, the parent, or facing out for a more adventurous day (perhaps the aquarium, anyone?!).

Since the pram options is always present, the top of the stroller will eventually be too short for many children (like Red, who is now four) but perfect for smaller kids up to a certain height.  The stroller seat also offers a nice recline for larger kids to nap, and a wonderful pram conversion for smaller babies and those who need to lie flat. 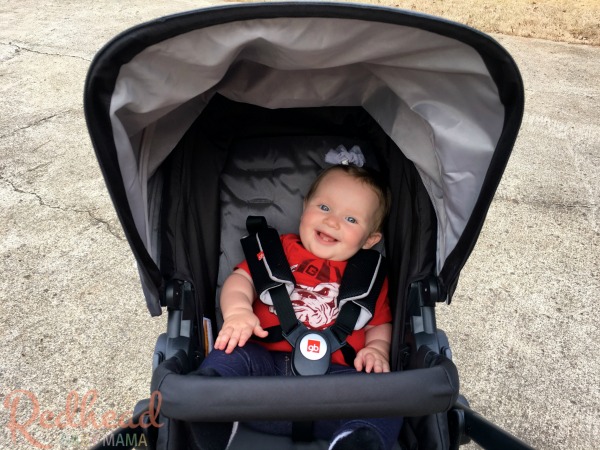 When it’s time for the stroller to convert to a pram, or reverse, there is a simple belt latch under the stroller seat leg area to unclip. It can’t be done single handid-ly (I tried!) but with practice can be done swiftly. 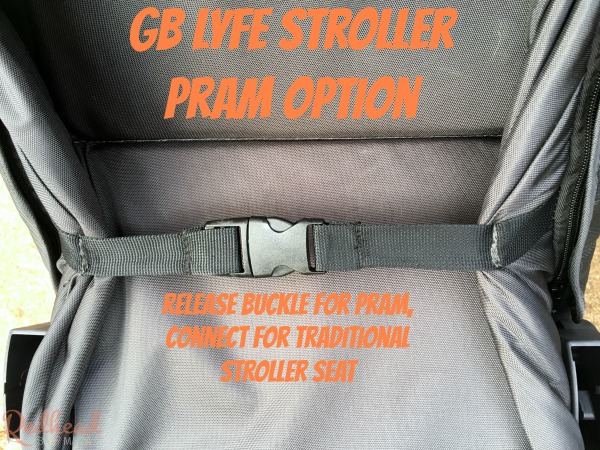 Voila! A pram for on-the-go napping babies, or those who can’t quite sit up yet.  The full canopy provides some privacy from touching strangers, and this isn’t even with the extended airflow portion – the pram option rocks! (And an experienced word to new Mamas: The pram option is the PERFECT place to change a diaper.  Slip the changing pad under neath baby, and you have a clean, safe spot to change your little one, no matter where you are – this has saved my booty (er, um, baby’s booty?!) so many times!) 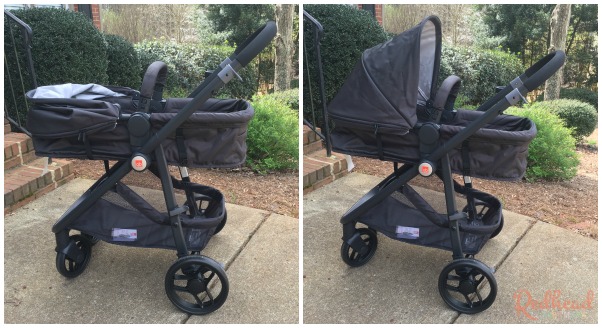 Note that the under basket is super roomy, and can be accessed from the front OR the back, meaning that no matter which seat configuration you choose, you can always reach for something. 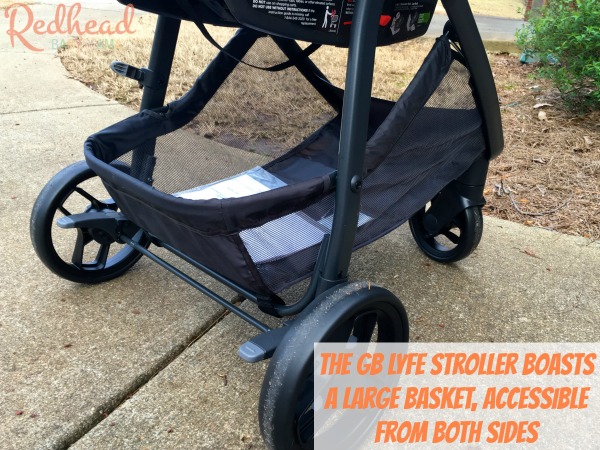 The GB Lyfe Pram Travel System also has a standing fold, which is slightly awkward, but fairly steady when it’s folded.  You will have time to secure baby into her car seat while and handle other items while the stroller is tipped up.  If this lovely pram/stroller hybrid is on your want list, you can purchase the GB Lyfe Pram Travel System in-store or online at Babies ‘R’ Us. 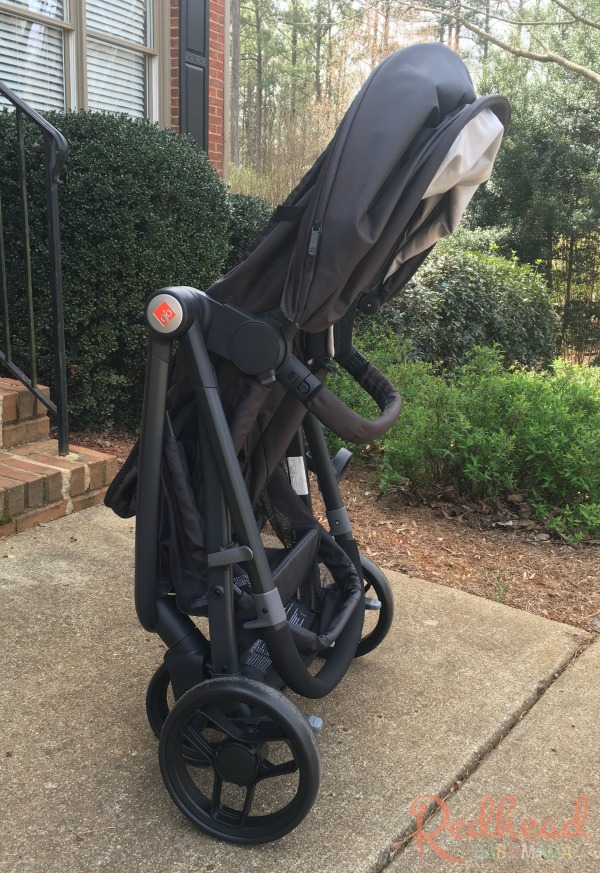