BOW WOW! Did you know we adopted a puppy this year! The lovely Lady came to live with us in February, and it’s been a whirlwind of puppy-dom ever since! After a short while of watching her grow, we realized that even with a much fluffier tail, she looks just like Skye from Paw Patrol! If you’re barking mad to get more of the best doggy crew around, read on to enter a giveaway for a PAW Patrol: Pups Save the Kitten Catastrophe Crew DVD!

That pesky Mayor Humdinger! He and his kitten crew are causing all kinds of mayhem in Adventure Bay and only the PAW Patrol can save the day in the brand-new DVD release, PAW Patrol: Pups Save the Kitten Catastrophe Crew! Available on September 21, 2021, this DVD includes the best episodes featuring Mayor Humdinger and his kitten Catastrophe Crew from the hit preschool series PAW Patrol, airing on Nickelodeon and produced by Spin Master Entertainment.

There’s no time for kitten around as the PAW Patrol tries to win the Spotless Town award, rescues missing kittens, saves Mayor Humdinger when one of his schemes goes awry, and more! Meow! The Kitten Catastrophe Crew is taking over! Mayor Humdinger and the feline troublemakers are causing all kinds of mayhem in Adventure Bay. First, the pups must clean up the kittens’ mess in order to win the Spotless Town Award. Then Farmer Al’s sheep run away and the kittens go missing! Finally, join the pups as they save the cat show and so much more!

PAW Patrol: Pups Save the Kitten Catastrophe Crew will be available on DVD from Paramount Home Entertainment and Nickelodeon Home Entertainment on September 21, 2021, for the suggested retail price of $10.99. Running Time: 1 hr 37 min

You can also whip up some cat treats for your own Kitten Crew with this downloadable recipe: https://bit.ly/PAWPatrolKittenCatTreatRecipe 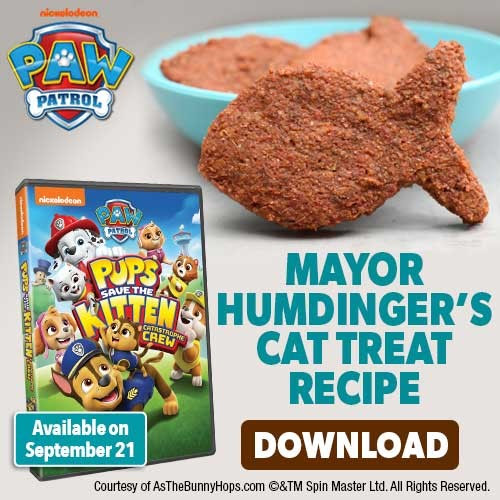 Check out our photo carousel of all the Paw Patrol fun we had with Lady! She LOVES her Marshall and Skye squeaky toys!

About Spin Master
Spin Master Corp. (TSX:TOY) is a leading global children’s entertainment company creating exceptional play experiences through a diverse portfolio of innovative toys, entertainment franchises and digital games. Spin Master is best known for award-winning brands PAW Patrol®, Bakugan®, Kinetic Sand®, Air Hogs®, Hatchimals®, Rubik’s Cube® and GUND®, and is the toy licensee for other popular properties. Spin Master Entertainment creates and produces compelling multiplatform content, stories and endearing characters through its in-house studio and partnerships with outside creators, including the preschool success PAW Patrol and nine other original shows along with multiple short-form series, which are distributed in more than 190 countries. The Company has an established digital presence anchored by the Toca Boca® and Sago Mini® brands, which combined have more than 50 million monthly active users. With close to 2,000 employees in 28 offices globally, Spin Master distributes products in more than 100 countries. For more information visit spinmaster.com or follow on Instagram, Facebook and Twitter @spinmaster.

About Nickelodeon
Nickelodeon, now in its 42nd year, is the number-one entertainment brand for kids. It has built a diverse, global business by putting kids first in everything it does. The brand includes television programming and production in the United States and around the world, plus consumer products, digital, location based experiences, publishing and feature films. For more information or artwork, visit http://www.nickpress.com. Nickelodeon and all related titles, characters and logos are trademarks of ViacomCBS Inc. (Nasdaq: VIACA, VIAC).