When Red was born, I signed him up for the Emory Child Study Center.  This lovely little place is a part of the university psychology department, where students, teachers and other Emory affiliates study children age 0-18 and how their brain develops. They concentrate mostly on how children and babies interpret numbers, space, objects and their relation to other senses.  Emory University is located in Downtown Atlanta. 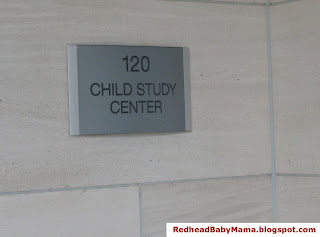 My brother was in a published Rutgers study when he was a baby – to study if infants as young as 3 months old could learn cause and effect – they could!  And that’s why we have to many cause and effect toys on the market today.  (We have several!)  So I decided to sign Red up so he could help make a difference, too.  Emory called me last week and asked to have Red participate in a study’s 3 round to learn how babies associate shape sizes and sound tones. Here’s a look at what Red had to watch for 5 minutes: 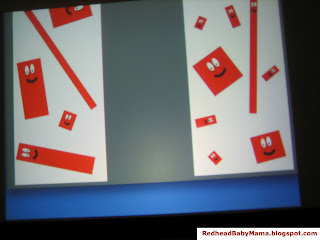 I was supposed to hold him on my lap and close my eyes, so that Red wouldn’t be influenced by what I was looking at.  I really found it hard not to giggle when I felt him looking back at me to see what I was looking at.  I warned the psychologists that Red had an unusually long attention span (he watched nearly a full length stage puppet show without being distracted at 6 months!), and they were surprised to see that I was right.  He watched the entire film, and I was told he did exactly what they had predicted with the the study.    Go Red!
Red was shown a screen similar to the one above with certain sized shapes associated with a certain note.  High notes for small shapes and low notes for big shapes.  Round 2 of the study did the opposite, and the babies were deterred by this unnatural pairing.  Red liked the correct association and watched the shapes in accordance with the hypothesis.  A small camcorder hooked up under the screen caught his every reaction – and me laughing……
Red was awarded his completion t-shirt after the study. I laughed because we needed a BIG t-shirt for our big man – we took home a 3T.  It says, “Emory University Spatial Cognition Laboratory”.  Very cool!
On our way out, we got to play a little bit in the toy center – there were no babies going before us, so we didn’t have to wait beforehand.  I took some shots. 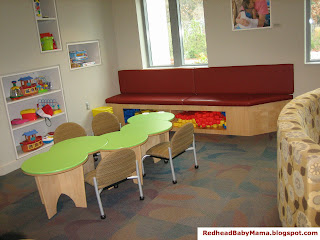 I’m not sure if we really made a difference, but it was a fun field trip to take with Red, and hopefully the study will be published and Red will be (sort of!) a star!