Red had a 2 month long ear infection during the early winter of 2013.  During that time, he ate like a bird, and refused most foods on account of how bad he felt.  Once his ears cleared up, his food refusal and pickiness was all the more strong.  Red only had about 7-8 foods he would eat, and routinely went to bed without dinner because I refused to be a short order cook.  He was a super picky eater, but Red needed to eat what everyone was having, and learn to like it.
Sure, this sounds like “mean old Mama” reaching out, but teaching your child to try different foods and take bites of what is served is an important lesson that Red was not learning.  This continued for almost a year, until last week, when Hubs and I really decided to put our foot down.  We were going to starve him out.  Our pediatrician agreed. If he’s hungry, he’s going to eat what’s in front of him.  Hold off the milk and the foods he really wants until he has tried or eaten other more nutritious things.
So the hunger strike began.  Friday morning, Red awoke at 5:30am, hungry because dinner the night before has been a failure.  “Mama; hungry.  Need snack”, was what I woke up to.  I scrambled him an egg.  He screamed, cried, threw himself on the floor in agony.  I was torturing him with clean eating.

Over the course of a few days, Hubs and I MADE him try peach slices, hamburger, crinkle fries that Nana made, hot dogs dipped in ketchup, pears, cinnamon apple sauce, grilled chicken, grilled corn niblets, mini corndogs and strawberries.  All of which he fussed over, gave in for a bite, may have liked and chewed up.  Only then was he given his milk, yogurt, etc.

The corndog incident was at a restaurant on Tuesday night. We decided to hit up a local grill, and served Red mini corndogs and his favorite fries. But the fries were completely off limits until two corndogs went down the pipe.   I actually caught Hubs making Red try a bite (and then he liked it).

The first time he had a chocolate graham cracker, he was really unsure, but when Hubs asked him to try it, he liked it… and wanted more (video embedded).

Wednesday night was one for the books.  We grilled hamburgers and corn on the cob.  After 6 days of being starved from his favorite trashy foods and only given the “healthy” stuff he wasn’t too fond of, we hit a plateau.  Two bites of hamburger and ketchup went in fairly easily.  When tempted with his drink, two bites of corn and more hamburger went in.  It was that final 8th bite of hamburger that did us in.  The hamburger went into his mouth, but that was about it. Red refused to swallow or chew.  That bite sat in there for over an hour.

When I tell you this was a strained point in my parenting journey, it was the truth. We wouldn’t let Red spit it out, or get down from the table until it was swallowed. The hamburger wasn’t poison, and the bites were so tiny that there was no way he was full. It was about power and willfulness… we did not give in.
60 minutes after the final bite, here we were. A swallow stand-off. What made him finally swallow? Maybe it was that his saliva has started breaking it down (gross, sorry….), maybe it was that Red was caving… maybe it was that Daddy had the iPad and was watching Red’s favorite show loudly in the other room. I told Red he could join Daddy to watch the Lego Movie if he finished eating, and buddy did he. 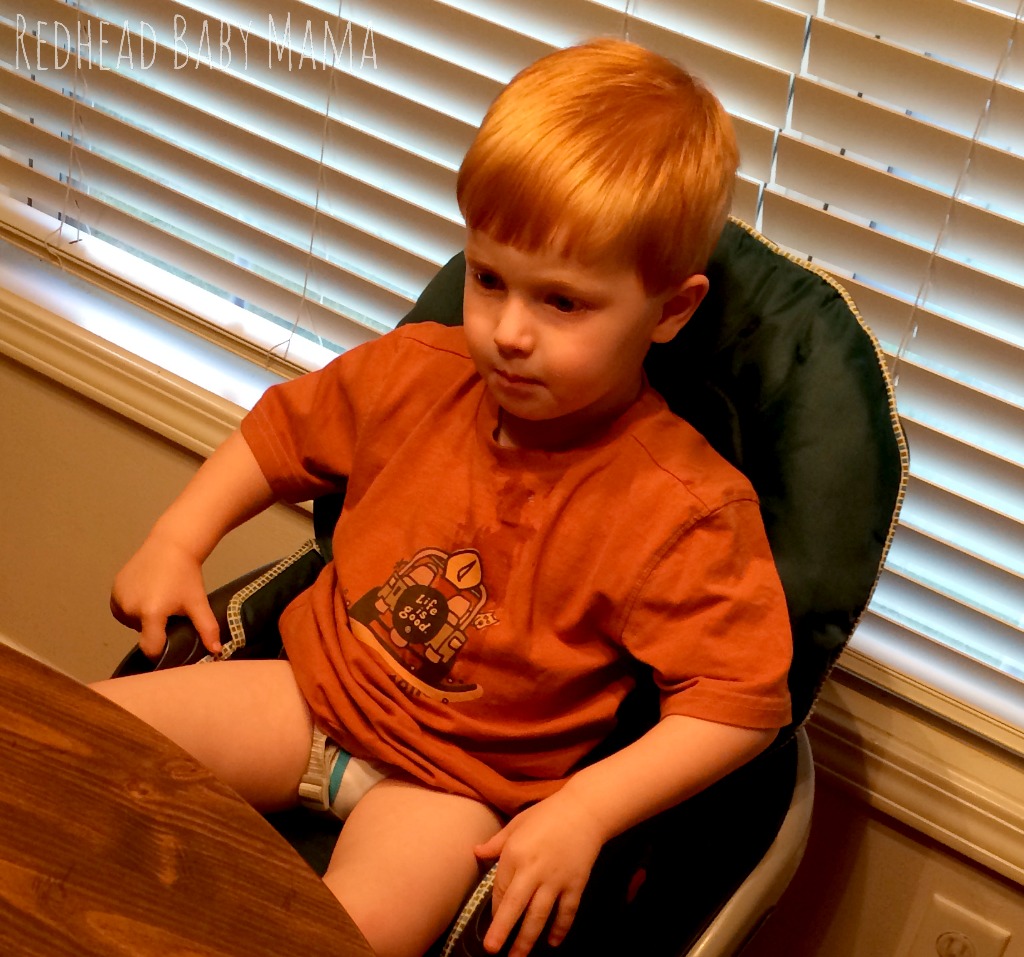 He finally finished.  7 days into the starvation plan, Red has tried over 10 new textures and food and didn’t die.  He didn’t starve, and he survived. (I’m sure he will write a book on the subject in a few years, with scathing parenting reviews).  I’m so proud of him, and we’re totally going to keep up the good eating!
How do your picky eaters react to new or different foods? Do you put up with it?