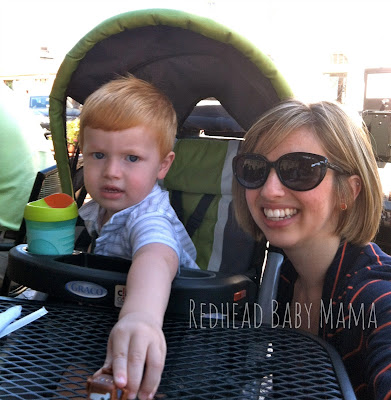 Lately, I’ve been itching to try and make some “fall memories”. I know it sounds pretty contrived, but since Red isn’t really a baby anymore, is halfway to being finished potty training, is running and wants to “cheese” for the camera, I feel like we can go adventuring a little more.
I saw a few friends posting that they were visiting orchards, water parks, farms, etc., and I wanted to see Red do those things too! But is he old enough? Will he remember it?  Most likely not. The Amygdala (forms your memories) doesn’t develop fully until age 3, so he most likely won’t retain memories of these activities for more than a few months.
Hubs, Red and I were all riding in the car on Friday when this went down:
Me: What do you think about taking Red on a hayride, or to visit an apple orchard? Do you think he would like it?  Maybe the tractors would be cool.  But, there’s always the possibility of a “peepee” in the middle of a corn field… that might not be too good.”
Hubs: *soft chuckling* ha. ha ha ha.
Me: What’s so funny?
Hubs: I was reading this article the other day about things that women do to try and create memories, and a bunch of guys were toughing it out, even though it wasn’t their thing at all.  The article then went on to say that if you want to watch the big game with a bucket of wings and a beer, ASK! She’ll tough it out for you.  You don’t always have to go to the orchard.
Me: But don’t you think it would be fun?
Hubs: Sure, I do.  But I also think that Red isn’t old enough to remember it yet.  Let’s wait one more year until he remembers!
Me: Hmmm. Maybe. I still might take him on the sly.
Hubs: If you really want to, do it! 🙂
Moral of the story for me? If I had waited through the weekend, I would have seen what fate had in store for me.  Memories.  The total unplanned, soul enriching, gag you with a spoon, fabulous family kind.  Saturday was such a nice day that we decided to take Doo along with us up the square. We needed honey and bread, but while we shopped with Red in the stroller and Doo on the leash, I didn’t take a single picture and soaked in the goodness.  Red pet lots of other bulldogs from a local meetup, and we stopped for pizza at a local joint on the patio where Doo was welcomed among other dogs.
Red tried his first milk “juicebox”, getting half of it down before squirting it all over his lap while Hubs tried desperately to stifle his laughter and remain the stern disciplinarian.  Red “ordered” lunch from the bar menu while sitting in his stroller and we had a great lunch. 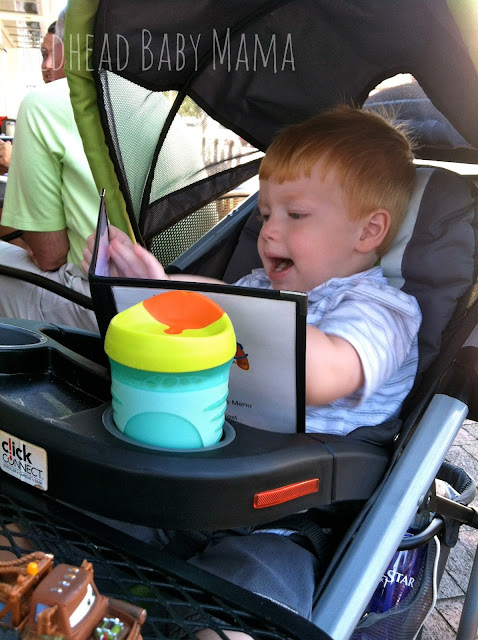 Later we strolled around, buying birthday presents for upcoming celebrations, and everyone got some ice cream from a Mom and Pop store near the market.  Even Dooley got a vanilla dog scoop and Red held an ice cream cone and tried to “cheese” for the video camera.
But wait, heart. You aren’t nearly full enough after a fabulous, long whole family morning at the farmer’s market.  Now you need a dose of love from grandparents and a spontaneous, BBQ lunch and baseball moment.  So we had one. Suddenly we noticed a free day, so we called up Chase’s Grandparents and brought up some BBQ dinner for everyone. While we lounged outside after food, Grandmartha found two old baseball gloves and two little baseballs for Red to play with. BUT, Hubs and Granddaddy got to them first! Next thing we know, Granddaddy is on his feet with his hand in the mitt, tossing the ball to Hubs and Red.
Red didn’t know how to throw well yet (it’s a mix of an underhand yank and a pretty far reach), so he ran the balls from each guy into each other’s mitts.  It was wonderful. 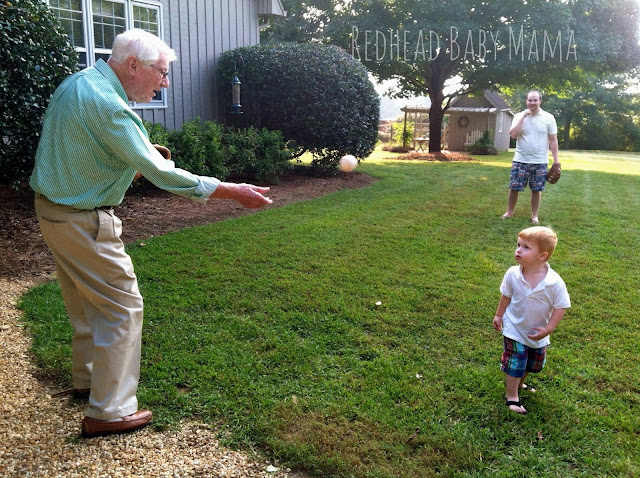 So, now I don’t have to go to the orchard. This was perfect. 🙂